What Kind of #Dog is That? 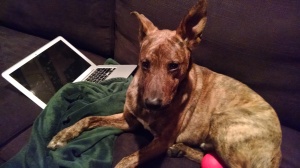 Two years ago, my family decided to get a dog. The kids were getting older and more responsible—they’d promised to walk, bathe, and clean up after the animal—and I’d wanted a dog for years too. Which is a good thing, because I take care of the mutt at least ninety percent of the time. But that’s a blog post for another day.

Back to the mutt, with an emphasis on the word mutt. We all agreed that a rescue dog would be the best choice for us. We’d read books and watched TV shows about various dog breeds, but felt we wanted to adopt a pet from a shelter instead.

Our requirements were pretty basic: a mellow, medium-sized dog who liked being around people and didn’t attack cats. At the time, we had two cats, one of whom was elderly and sickly (and has since passed over the rainbow bridge) and one who has only one eye.

At the animal shelter, we were introduced to several dogs, but one struck us as perfect. Spencer. He was medium-sized, friendly but mellow, playful, and had a slightly lame back leg. Apparently another family had almost adopted him, but decided not to because of his limp. Which only made us love him more. He’d been rescued from the woods of South Carolina, infested with all kinds of parasites. He was thin, brindle-colored, a bit mangy, and about year old; the shelter believed he’d probably been stray for most of his life. Of course, nobody knew what breed he was, but on his official paperwork, someone had written “boxer mix.”

Good enough for us. We took him home and the cats let him know right away not to mess with them. A day or two later, we hosted a family party, and everyone marveled over what a sweet dog he was. The vet liked him too, although the first thing she said was, “This is no boxer mix.”

“Oh,” I said, wondering about Spencer’s breed for the first time. “What do you think he is?”

She had no idea. She said DNA tests were available, but they’re expensive and often inaccurate. I said we didn’t really care what kind of dog he was, but were concerned about his leg. And so was the vet, after a full exam. His left thigh was a full inch smaller than the right, meaning that he may have suffered a serious injury in the wild, or perhaps been born with a bone or muscle disorder . X-rays would be the first stop in determining what was wrong, and what the treatment might be.

Needless to say, I left feeling disheartened. We weren’t able to schedule the x-rays for several weeks because of the vet’s schedule and ours, so during that time, my family walked Spencer and gave him lots of love. And every time we’d take him out, someone (at least one person) would ask, “What kind of dog is that?”

We’d always just say, “A mutt,” but we were starting to wonder a bit more, as Spencer began to show a few signs of aggression toward certain dogs and people who visited our home. Meanwhile as he grew more familiar with us and his new surroundings, he started looking sleeker and nobler. All of which made us more curious about his history, and his breed too.

“Definitely some pit bull in him,” some people would say. Others would suggest that since he’d been found in the wild, he might actually be part wolf or coyote.

Then he went for his x-rays, and we were thrilled to learn that his leg had gotten much better. Both thighs were now almost the exact same size, and the images showed no indication of a serious injury. We started to let Spencer run around off-leash, and were astounded by his speed. Yes, he still limped, but he also flew! Very few dogs could catch him, and he caught and killed at least one rabbit.

“He’s part greyhound,” said a greyhound enthusiast who owned two greyhounds herself. “You can tell by his lines.”

Other people have contested that he’s “mostly Dutch shepherd,” or “part shepherd of some kind,” or “at least part Australian cattle dog.”

Still others have told us that they don’t believe he was in the wild for very long at all, and swear he’s a product of a breeder. “He’s not just a random mutt,” said one person. “Someone bred that dog for hunting.”

We’ve also heard that he’s “some kind of fancy Egyptian dog,” “a type of dog bred only in Georgia,” “most likely a Puerto Rican sato dog who somehow ended up in South Carolina,” “a herding dog, for sure,” and “a mix between a terrier and a hound.” I should also note that most people who comment on Spencer’s breed do so with quite a lot of authority.

All of which leads back to the question: why should anyone care? He’s a dog after all. A pet. A friend. A good friend, most of the time. (We don’t need to mention the couch he destroyed, or the rug, or the pillows, or all the shoes, right?)

One man I’ve gotten to know through dog walking has gotten so tired of people asking what kind of dog his rescue mutt is that he’s started making up breeds. He doesn’t do it to be cruel; he’s just sick of saying, “I don’t know,” over and over again. Some dog owners also feel that it’s a little like racism to ask a perfect stranger what type of dog they have. After all, you wouldn’t walk up to a human on the street and ask about their ancestry.

On the other hand, I’ve met so many interesting people that I never would’ve met if I didn’t have Spencer. And it seems as though asking about a dog’s breed is the most typical ice-breaker. I also don’t really buy into the racism thing, as dogs don’t know what we’re talking about, and if they did, I don’t think their feelings would be hurt if they knew we were discussing their heritage. Yes, certain breeds—mainly pit bulls—often get a bad rap, and there are people who avoid pit bulls on principle, but for the most part, people are just curious.

Some days, I wish I could say, “He’s a blah-blah-blah,” and end the conversation right there, but I think I’d miss out on many of the joys of dog ownership if I did. And on days when I really don’t feel like chatting, I’ll just smile and say, “He’s a really good mutt.” Nothing wrong with the truth, short and simple.

My two published novels, LEAVING THE BEACH (a 2016 IPPY Award winner) and LIVING BY EAR, focus on music and following your passions. A new novel called IT DOESN'T HAVE TO BE THAT WAY is due out in September, 2020. I live in the Boston area with my family and pets.
View all posts by Mary Rowen →
This entry was posted in animals, dogs and tagged animal sheler, brindle, cats, dog breeds, dogs, dutch shepherd, greyhound, mary rowen, mutts, pit bull, racism, rescue dog, sato, spencer. Bookmark the permalink.

6 Responses to What Kind of #Dog is That?