Please welcome poet and novelist Anesa Miller to my blog today. This is a really beautiful post, and I’m grateful to Anesa for sharing it.

You mean they didn’t fly off the shelves, after all?

Way back in a previous era of self-publishing, I wrangled a grant to fund the printing of my grief-themed poetry book. To this day, numerous copies (let me save a bit of face by omitting an exact number) still languish in my garage and closets.

It dawned on me that American poetry books, especially self-published ones, rarely fly off the shelves unless one lives in hurricane country.

So I confronted the fact that self-publishing equals self-marketing. Chief of Sales did not seem a promising role for me, considering that I became a writer to accommodate a tendency toward introversion bordering on agoraphobia. For the sake of my poetry, however, I bit down on the hardest object available—in this case, the hefty tome of Writer’s Digest’s Poet’s Market—and steeled myself for an exercise in self-promotion.

Leafing through the fine print, I compiled a list of magazines that, allegedly, “Accept books of poetry for review.” Perfect, I thought. I’ll persuade a few of these folks to review my lovely book, thereby attracting others to purchase a copy! Of course, sending out review copies and receiving orders with checks enclosed would all take place via snail mail. So quaint—it’s almost as if I were Jane Eyre, posting inquiries for a situation as governess to a good family.

I organized my list into three categories. The “Prestigious” category included fancy quarterlies like Prairie Schooner that printed famous poets in every issue and reviewed books from presses like Copper Canyon and BOA Editions. Although I had already sent many individual poems to Prairie Schooner with much stubborn hope but no avail whatever, I couldn’t resist giving the book a try as well. Next, the category of “Not So Prestigious but Nice Enough” included journals of smaller print runs that published poets I hadn’t necessarily heard of, but that seemed to uphold high production standards like pretty cover art and perfect binding. Here I placed the River Oak Review, Kestrel, and others. That left the “Basic but Still Worthwhile” category, which covered the great many titles that cried out to me from the pages of Poet’s Market: The Old Red Kimono, Earth’s Daughters, Djinni, Medicinal Purposes. This included the hated saddlebacks (stapled booklets like the ones I made at home with my children) and even several tabloids.

Was my attitude snobbish and deluded? Go ahead—you be the judge.

I mailed out thirty copies of my book: ten for each category of my list. I enclosed a personalized letter to the review editor of each magazine, along with a self-addressed postcard so he or she could let me know how quickly to expect the review of my book to grace their pages.

Out of thirty postcards, three came back. One bluntly stated that grief is a fitting topic for the world’s greatest poets. It behooves the rest of us to hold our tongues to spare intelligent readers our sentimental clichés. Another informed me that the magazine was ceasing publication. And the third offered a balm of compliments (“What a lovely and deeply spiritual book you have produced!”), while explaining that they had stopped reviewing books due to limited funds and space. God bless Kathy DiMeglio of Kalliope, wherever you may be today!

Thank God for the tabloids and saddlebacks! One of these finally published my only review. It wasn’t actually a litmag from my list—just a regional newspaper for the New York Finger Lakes resort towns that ran short poems as filler. Truth be told, they offered to print a review of my book if I paid for an ad, which I did. I came up with something irresistible like: GRIEF POEMS FOR YOUR LOVED ONES. JUST $6.95 ppd.

The review duly appeared, but I can’t find a copy in my records, even though I’m a notorious saver of everything. I think it ran about 20 lines and said some nice things. But despite my ad that appeared on the same page, I never received an order from the Finger Lakes region or from much of anywhere. Like the majority of poets throughout history, I sold a handful of books to people who already know me. Once, at a street fair, a woman stole five copies for reasons unknown. She slipped them under a hand-woven poncho and hurried away before I realized what she was up to. Dismayed at the time, I thank her today: five less books in the garage!

Like I mentioned above, these poems concerned grief and healing. I wrote many of them in response to my husband’s harrowing experience of the death of his teenage daughter. Others reflect losses in my own life. So it befits these themes, I think, that we wound up giving away many dozens of copies of the book. For a time, I was mailing them out to any locale where I happened to read of young people dying of illnesses or in unfortunate events. When we visited Denver, I took copies to all the churches I’d seen mentioned in the news in connection with memorials after the Columbine shootings.

I was pleased to receive an occasional note of thanks. Still, the excess boxes were beginning to molder.

And then, at one point along the years, a miracle took place.

My husband is a well-known scientist who attends a number of professional conferences. I tagged along to one such meeting and happened to get acquainted with a kindly older gentleman who owned a sales and distribution business for books related to alternative medicine. My husband persuaded him to accept my poetry book for distribution. Naturally, I was thrilled, imagining that someone would now take over marketing for me.

But that was only a minor part of the miracle.

The distributor sold five copies of my book in five years. At the end of that time, I received a form letter from the kind gentleman’s successor. They were terminating our professional relationship due to a “poor fit” of content areas. And they were charging me $45 for five years of storage fees, plus postage for returning my “unsold stock.”

All of that was irritating at the time. It is nothing, however, in light of what soon happened. Because one of the copies the distributor managed to sell came into the possession of a very special person.

One morning, my husband received an email from a woman asking permission to set a poem from my book to music. She explained that she was a music therapist and had picked up A ROAD BEYOND LOSS by Anesa Miller from the sales table at some nearly forgotten meeting. Now she was preparing to move house and had been sorting through her shelves, disposing of unneeded stuff. When she came across my book, something made her pause before tossing it in the giveaway box. She half-remembered opening it a year or two earlier and thinking she really should take time to read it more closely. Sinking down on a chair in the disarray of moving boxes, she opened my book again. She read the first stanza, and something remarkable took place: A fresh, beautiful sound welled up around her. She read on, and the sounds flowed and changed, then flowed on again. 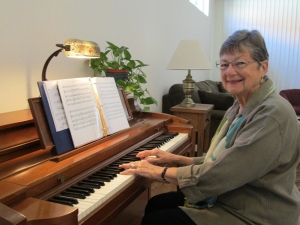 The woman’s name is Jane Click. She had never composed music before, but the words and rhythms of my poems inspired her to try a new path. Eager simply to capture the melodies born in her mind, she promised not to seek profits, or to share them with the poet (me!) should any proceeds unexpectedly result.

Of course, I gave permission for Jane to set the poem to music and share the resulting song with whomever she wished. Less than a week later, she emailed again. Her project had expanded—each poem in the book had inspired its own melody. She would like to write music for all the poems and arrange instrumental lines to go with the vocals.

My mind was boggling: In spite of all the frustrations with publishing and marketing, in spite of the boxes in the garage—one copy of my book had found its way to the hands of An Ideal Reader. And she was a reader who not only perceived the feelings I’d hoped to express but extended them. A reader who found a use for my words beyond my wildest dreams.

As I got acquainted with Jane, it came as little surprise to learn that, like my husband, she is a bereaved parent. Her path to becoming a music therapist later in life was a winding one that helped her move beyond her own grief at the loss of her son to a drug overdose. She understood every milestone described in my poems. With a group of musicians at her church, she recorded the songs she wrote, created a CD, and produced a booklet of sheet music. She sold at least a dozen copies of my book and sent me a check for the full amount.

These items are available here.

The following summer, Jane traveled from her home in Tucson, Arizona, to visit me in Ohio for the first time. She played her music for me on the piano. She said, “Your words are so powerful, everybody cries when they hear them.”

I broke down, too, and cried in her arms.

Jane held me around the shoulders on the piano bench. “It’s okay,” she said. “Everybody cries.”

Everybody: from the world’s greatest poets to all the rest of us.

If you would like to listen to a sample of Jane’s music, please email me ( mary <at> pocomotech <dot> com) and I’ll send along a couple of files Anesa has shared. One of the songs is called “Guess Who.” The other is “A Year Gone By.” They’re both very lovely.

Anesa Miller is a recipient of a Creative Writing Fellowship from the Ohio Arts Council. She studied writing at ​the University of Idaho. Her work has been published in The Kenyon Review, The California Quarterly, The Southern Humanities Review, and others. Her debut novel, Our Orbit, is a story of cultural conflict set in Appalachia in the 1990s.

My three published novels, LEAVING THE BEACH (a 2016 IPPY Award winner), LIVING BY EAR, and IT DOESN'T HAVE TO BE THAT WAY focus on women figuring out who they are and what they want from life. Music and musicians have a way of finding their way into the stories. I live in the Boston area with my family and pets.
View all posts by Mary Rowen →
This entry was posted in #musictuesday, music, music tuesday, Uncategorized, writing and tagged a road beyond loss, anesa miller, ideal reader, jane click, miracles, miracles happen, novel, poetry, publishing, writing. Bookmark the permalink.