The Indie Spirit is Alive and Well in Montreal

It might seem a bit ironic to be writing about the independent spirit in Montreal as July 4th weekend winds down here in the States. But my family spent four days in Montreal last week, and wow! I won’t bother telling you about the major tourist attractions, because you can find tons of info online about Le Parc du Mont-Royal, the Botanical Gardens, beautiful and historic Old Montreal, Notre-Dame Basilica, the Olympic Stadium, the Montreal Biodome, and other notable landmarks. We did our best to see as many of those things as possible, and they were all incredible.

But what really blew my mind was the astounding number of indie businesses in the city. We rented an apartment in the neighborhood known as “le Plateau,” and I think I enjoyed walking around there even more than visiting the typical tourist sites. It was such a thrill to stroll down a busy, thriving, commercial street and see almost zero chain stores.

Most exciting was the plethora of independent book stores. They were EVERYWHERE! Below are pictures of just a few indie book stores that were less than a mile from our apartment. All of these stores buy and sell new and used books; some even sell records, CDs and DVDs. I brought along two copies of Leaving the Beach, and although all the stores I visited would only purchase books written in French, I was happy to donate my two copies to a couple of lovely store owners who promised to put it on their shelves. So who knows? Maybe someone who never would have discovered my book is reading it right now. I sure hope so. 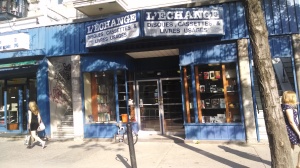 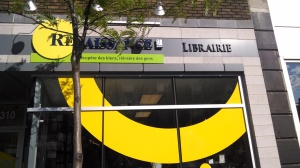 And if you know me at all, you know I have a passion for music, particularly the variety that comes packaged in some sort of box, rather than downloaded from a computer. The decline of record stores in the U.S. makes me truly sad, so what a wonderful surprise to find that record stores are living and breathing quite well in Montreal. Some even specialize in certain types of music. I couldn’t help but smile when I saw one store that sold only rock, metal, and progressive. And Beastie fans, how can you not love a record shop called Paul’s Boutique?

Not convincing enough to get you up there? How about this? You can also shop for reasonably priced clothing and be hard-pressed to find a chain store. Yes, I did come across Forever 21, Aldo, and American Apparel, but those places were grossly outnumbered by shops like the ones pictured below. My favorite was the one called Fet Art (pictured at the top of this post). I saw a really funky bracelet in there on my last day in Montreal, but when I went back to buy it, the store was closed for the evening! Alors, I guess that means I’ll have to get back up there sometime soon. 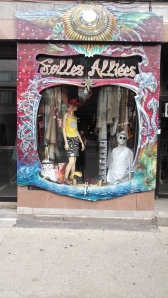 Looking for Petco? I didn’t see it. But here’s a pet store that was situated near our apartment. 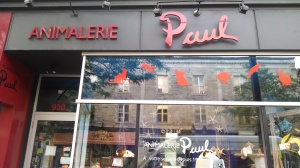 How’s that for indie shopping? And if you get sick of that sort of thing and need a more rigorous adventure, we did some whitewater rafting and power boating on the St. Lawrence River too. There’s a small company called Rafting Montreal that provided us with hours of fun. Who knew that a river could have actual waves like the ocean?

And the food? Completely amazing, everywhere we went. All in all, a perfect vacation for our whole family. We even got to take care of Rouky, the cat who kindly let us crash in his apartment. And we made it home in time to see the fireworks on the Boston Esplanade Thursday evening, before the rain set in.

My three published novels, LEAVING THE BEACH (a 2016 IPPY Award winner), LIVING BY EAR, and IT DOESN'T HAVE TO BE THAT WAY focus on women figuring out who they are and what they want from life. Music and musicians have a way of finding their way into the stories. I live in the Boston area with my family and pets.
View all posts by Mary Rowen →
This entry was posted in Uncategorized and tagged books, bookstore, Canada, clothing store, fashion, indie, indie shopping, indie spirit, Leaving the Beach, montreal, record stores, shopping. Bookmark the permalink.