What’s That Book? Leaving the Beach by Mary Rowen

Many, many thanks to book blogger extraordinaire, Book Club Mom, for this generous, thoughtful review of my novel, Leaving the Beach. I highly recommend checking out the Book Club Mom site if you’re looking for something new to read.

And while we’re on the topic, I’d like to announce that a brand new edition of Leaving the Beach will be published in early summer, 2019. Please stay tuned for additional news on that–and more–soon! 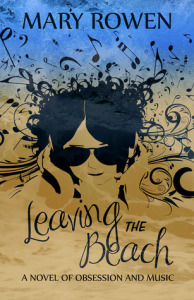 What’s it about?  The story of Erin Reardon and her search for happiness. Told in the first person and set in the working class town of Winthrop, Massachusetts, readers get to know Erin in alternating time periods—in the 1970s and ‘80s as an awkward teenager and college student, and in the 1990s as a young adult. As a slightly overweight teenager, Erin struggles to fit in, but finds comfort in music, to the point of obsession, as she latches on to a string of rock stars, certain that they are the only ones who understand her: Jim Morrison, Freddie Mercury, David Bowie, Bruce Springsteen and the fictional grunge rocker, Lenny Weir, Erin’s main obsession. But Erin has major problems. Trouble at home and feelings of guilt and inadequacy lead to an eating disorder, alcohol…

My three published novels, LEAVING THE BEACH (a 2016 IPPY Award winner), LIVING BY EAR, and IT DOESN'T HAVE TO BE THAT WAY focus on women figuring out who they are and what they want from life. Music and musicians have a way of finding their way into the stories. I live in the Boston area with my family and pets.
View all posts by Mary Rowen →
This entry was posted in Uncategorized. Bookmark the permalink.