Writing Without a Publisher and Biking the Rail Trail 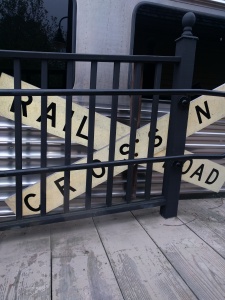 Like lots of writers, I’m a runner too. I’m not sure why so many people who love banging out words are also drawn to the often mundane process of putting one foot in front of the other—over and over again—but we are. For me, running serves many purposes. It provides exercise and anxiety relief, allows me to exercise the dog and myself at the same time, doesn’t require much special equipment, and can be done just about anywhere. There was a time when I thought a lot about running. I prepared for and ran road races, got excited about buying new sneakers, and subscribed to running magazines. But in recent years, running morphed into something I just did. I didn’t want to stop doing it, but I didn’t pay much attention to it either. I took it for granted. It was simply part of my daily routine.

Thankfully, my husband has a job that pays the bills and puts food on the table, so in addition to my family and domestic duties, I get to spend time composing books, essays, and blog posts. And in 2014, the Seattle hybrid publisher Booktrope published two of my novels. I was thrilled. Not only was I lucky enough to have a team of people editing my words and making the books look great, but I was part of a wonderful community that helped each other with the hardest part of writing: the marketing. But maybe, as I plugged away slowly on my third novel, I was getting a little too comfy. After all, Booktrope had already agreed to publish the book when it was done, and I didn’t have a deadline. Make no mistake: I was about as far from Stephen King or Jodi Picoult success as a writer can get, but I’d also seen my work in print. I’d done readings and signings. I’d discussed my work with book groups. I still loved writing as much as ever, but some of the excitement was wearing off. Perhaps, like running, I was taking my writing life for granted.

But at the end of April, Booktrope announced—quite unexpectedly—that it was ceasing operations. Authors would get their rights back, but all books would go out of print within a month. Then, about a week after the announcement, I suffered a running injury. It wasn’t particularly serious, but I knew it wouldn’t heal unless I stopped pounding the pavement for a while.

First world problems, yes. I shed no tears. But my daily routine got all shaken up. Since I couldn’t run with the dog, I’d walk him after breakfast, then go out for a bike ride to calm my anxiety demons. And as I cycled up the rail trail near my home, I’d contemplate my writing future. I felt off-kilter and low-key depressed. My feet were literally and figuratively off the ground.

And there’s very little relaxing on the rail trail, because much like the publishing industry, it’s a very crowded place, with many people jockeying to get ahead. The biker who gets too distracted out there can end up in a heap of metal and bloody flesh.

Also, much like in publishing, sometimes the people who move fastest on the trail are actually fairly young and new at the game. But youth, natural talent, and enthusiasm can be a formidable combination. Of course, the young upstarts aren’t always appreciated by more experienced and established riders. Not only do they sometimes cause problems, but their recklessness can give all bikers a bad name. Sound familiar, writers?

On the other hand, there’s a lot to be said for working hard and putting in the hours. Because neither good fortune nor wild energy can last forever, and the people who eventually become the best bikers—and writers—are the ones who keep honing their craft and growing stronger.

Sadly, jerks and airheads exist, both in publishing and on the rail trail. And sometimes it’s not easy to tell one from the other. Take, for example, the biker who flies past you on a narrow passage without announcing his presence. Is he unconcerned about your safety, or has he even considered that you might swerve to the left? With writers, it can be the same way. Perhaps there’s a poet or novelist you’ve helped to promote in various ways, but they, in turn, have done little or nothing to help you. Is that because they believe they’re worthy and you’re not? Or are they simply so absorbed in their art that they don’t realize you’re struggling too? See what I mean? It does seem, however, that both biking and publishing can temporarily blind people to the needs of others.

The good news is that helpful writers and bikers far outnumber the unhelpful ones. I’ve seen super-serious riders giving tips to newbies out on the rail trail. And some seasoned writers—regardless of how famous they’ve become—have never forgotten what it’s like to start out, and often take time to support and encourage new talent.

So, as you can probably tell, this combination of losing my publisher and getting injured has pulled me pretty far out of my regular routine. In fact, this is the first blog post I’ve finished in weeks. Since the shakeup, I’ve been spending more time with friends and family, reading more, and thinking about the bigger picture. I’ve also been staying up later at night and crashing on the couch in the middle of the afternoon. I won’t lie: it’s been strange.

Ultimately, though, I think this type of change is good. It’s healthy and interesting to take a step back once in a while. But I’m feeling ready to engage again. Over the past couple of days, I’ve done a bit of running. Very slow stuff, and very short distances, but the pain—for the most part—has stayed away. The novel’s calling to me again too, so maybe on Monday, I’ll open up that file and start editing. Like everyone else, I don’t know what the future holds, but it seems like time to start putting one foot in front of the other again.

My two published novels, LEAVING THE BEACH (a 2016 IPPY Award winner) and LIVING BY EAR, focus on music and following your passions. A new novel called IT DOESN'T HAVE TO BE THAT WAY is due out in September, 2020. I live in the Boston area with my family and pets.
View all posts by Mary Rowen →
This entry was posted in #MondayBlogs, anxiety, biking, books, exercise, family, feedback, health, life experiences, novel writing, publishing, reflections, running, wisdom, writing and tagged anxiety, bicycles, biking, Booktrope, depression, exercise, Jodi Picoult, publishing, rail trail, Stephen King, writing. Bookmark the permalink.