The Karma of Found Art

Original paintings are treasures to me. I don’t care about their financial “value.” What I love is staring at them for moments or hours, appreciating the effort and dedication of the artist. After all, each brushstroke was done deliberately, by a human being. A painting may carry messages unintended by the artist, but the paint on the canvas was put there in a certain, unique way, and I find that fascinating. Especially since I couldn’t produce a decent painting if the safety and well-being of the entire universe depended on it.

I also appreciate the way paintings can’t be duplicated (like prints and photographs); rarely get modified or “interpreted” by others (like songs); or get edited by multiple people (like books). So I try to hang as much original artwork in our home as possible. Fortunately, several of my friends are gifted artists, and over the years, they’ve shared some of their work with my family. My husband and I have also bought a few paintings over the years for various reasons.

Then, there’s our found art. Found art is one of my very favorite things, because it’s always a surprise, often a mystery, and it’s free. Every time I look at one of our pieces of found art, I feel eternally grateful to the person who created it and left it for someone else to enjoy.

Now to clarify, found art is art discovered legitimately. It’s never stolen, and, in my opinion, shouldn’t be the result of dumpster diving, which is rude and also illegal in most places. Dumpsters on private property are private.

Found art, on the other hand, is generally spotted on the curb, often accompanied by a note stating that it’s up for grabs. Although there are exceptions. And I think there’s something karmic about found art, too. In other words, people often discover it after they’ve donated things themselves, or have suffered emotional losses.

For example, my very first piece of found art was this lovely little painting, done by a roommate who left it behind when she moved out. And for the record, I did check with her to see if she wanted it back, but she said to throw it away. For me, however, the painting was/is anything but trash. I was physically unhealthy at the time, and because the roommate had gone to live with her boyfriend, I was also left temporarily alone in an apartment I couldn’t afford on my own. It’s just a simple little painting, but its colors comforted me, and helped me believe things would get better. And they did. Not long afterwards, I found not one, but two new roommates, and a whole new chapter in my life began. 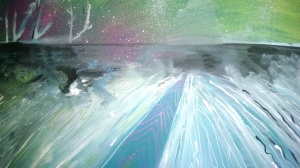 Small piece spotted on the curb in Montreal

Jump ahead a bunch of years to last summer, when my family took a little trip to Montreal. The vacation was nice–we loved the city and hope to get back there soon–but the weather that week was so unbearably hot and humid that we didn’t do nearly as much walking (or shopping) as we’d planned. In fact, we spent much of the vacation rafting and boating on the Saint Lawrence River, in an effort to stay cool. We were also carrying some heavy emotional baggage, as our 17-year-old cat, Mac, was ill and we knew he had very little time left. And my son was about to begin high school, which was foreign territory for us. So as we trudged to our car, preparing for the long drive home, the whole family was feeling end-of-vacation anxiety. Back to the real world; back to reality, responsibility, and imminent pet death. But about a block from the vehicle, on the grass beside the road, was a pile of discarded household goods with a sign that said FREE on it. We weren’t interested in any of the dishes, pans, or silverware, but right in the middle was this painting. It looks sort of like someone’s art experiment, but I love the optimism in it: the pink on the horizon, and the sparkly stars in the pretty green sky. Taking it home with us made the trip feel more complete, and also helped me believe that although we were probably going to encounter some darkness in the near future, there were good things up ahead.

I’ve already written a couple of blog posts recently about the challenge of cleaning out the home my parents bought when I was a little kid, the house in which they raised my brothers and me. In a few words, it’s been a lot. A lot of dust, a lot of tears, a lot of bittersweet laughs, a lot of hauling things around. One of the hardest parts has been saying goodbye to things that seemed like permanent fixtures in our lives. We’ve done our best to keep the really special stuff, but none of us have much extra space, so many large items have ended up on the curb: perfectly good furniture, bicycles, yard equipment, TVs, dishes, glassware; you name it. And although it’s kind of cool seeing people pull up in trucks to load them up with your castoffs, it’s also slightly sad. (Hey, there goes my childhood bed!) So it was very exciting for me, the morning after a huge day of cleaning, to find this awesome painting on the curb in a neighborhood near my current home. The note on it said, Free sidewalk art circa 1950 NYC artist unknown. I fell in love on the spot, and the painting looks terrific over our living room couch. A couple of people have already expressed interest in buying it, but I’d never sell it. (That would be bad karma, right?) On the other hand, perhaps I’ll pass it along–on the curb of course–someday, when the time feels right.

An oil painting by my dad, done in a summer art class

And here’s the final one for today. It’s my favorite painting right now, as I think you’ll understand if you keep reading. Earlier this week, my brothers and I were in the final stages of cleaning out the house. As far as we knew, everything was gone from the upstairs level, and the only room downstairs that contained anything at all was the kitchen. But as I swept out a deep hallway closet, I saw something flat and wrapped in white tissue paper way in the back. I was actually a little frightened. What was it, and why hadn’t anyone noticed it before? Of course, I pulled it out and unwrapped it, and was delighted to see that it was an oil painting my dad had made when I was a kid. He’d taken an art class one summer, and although he was no Picasso, I think he did an OK job with this one. Neither of my brothers wanted it, nor did my mom, so I’m really looking forward to getting it framed and adding it to my family’s found art collection.

How about you? Have you ever discovered something wonderful (art or otherwise) on the curb, or in some other unexpected place? If so, please share your story in the comments section.

My three published novels, LEAVING THE BEACH (a 2016 IPPY Award winner), LIVING BY EAR, and IT DOESN'T HAVE TO BE THAT WAY focus on women figuring out who they are and what they want from life. Music and musicians have a way of finding their way into the stories. I live in the Boston area with my family and pets.
View all posts by Mary Rowen →
This entry was posted in art, found art, karma, life, paintings, surprises and tagged art, Canada, dumpster diving, found art, hope, karma, life, montreal, moving, optimism, paintings, roommates, Saint Lawrence River, surprises, transitions. Bookmark the permalink.

13 Responses to The Karma of Found Art