Happy Wednesday, blog readers. Today, my guest is the wonderful and talented author February Grace, who recently released a brand new book. So without further ado, let’s get started!

MR: Hi February! I’m so happy to have you on the blog again. Thank you for stopping by. A while back you contributed a great post to my Music Tuesday series, and now you’ve got a new book out that I’d love to discuss. First of all, it’s called Wishing Cross Station. Can you tell my readers a little bit about the story?

FG: Of course! Thank you so much for inviting me to visit again, I truly appreciate it. 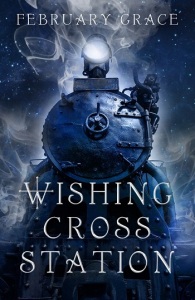 Wishing Cross Station is a bittersweet fantasy tale of trains and time travel. Our young hero, a page at his college library, is sent to pick up a private donation of books. He has no idea where one of those books will take him, or what it will take from him.

He ends up retracing a powerful man’s footsteps into the past, and caught in the same dangerous trap; falling in love with a woman he was never meant to know, and unsure he will ever find his way home.

MR: Who would you say your intended audience is: young adults or regular old adults? Or is Wishing Cross Station the type of book that can be enjoyed by people of all ages?

FG: LOL Regular Old Adults… I like that, and I think I qualify as one of those! You should definitely make that a standard genre name!

I’d say this book is intended more for a New Adult or just adult audience, though I can imagine some YA readers finding it a worthwhile read as well. It all depends upon the individual interests of the reader in this case, I think, more than the reader’s age. I consider the ‘rating’ to be PG-13.

MR: I’ve only just begun to read Wishing Cross Station, but one sentence from its blurb really intrigues me:

When nineteen-year-old college library page Keigan Wainwright is sent to pick up a private donation of books for the school’s collection, he has no idea where one of those books will take him, or what it will take from him.

Of course, I’m not asking you to give away any spoilers, but I get the sense that Keigan’s life may end up intertwined with the life of a character from the donated book. Do you want to discuss that?

FG: Not a character from the donated book, because the donated book is not a work of fiction. I don’t want to give too much away, but Keigan’s life does end up entwined with that of someone who possessed the book in the past. Even though he’s never met them, he finds himself getting to know them quite well through the contents of the book. I think that’s about all I can say without spoilers.

MR: So Wishing Cross Station is classified as a “bittersweet fantasy romance.” I know there’s been a lot of debate recently in the romance writers’ community about the way romance novels end. Some people say there MUST be a “happily ever after” ending, while others say the ending can be more ambiguous. What’s your opinion on this topic?

FG: I personally think each story needs whatever ending the rest of the book (and/or its characters) dictate. I think the ending has to make sense with the overall story.

Wishing Cross Station is primarily a fantasy novel (though romance is a huge part of it) so I don’t believe it falls under the ‘rules’ of the Romance genre.

I know there is a market that expects only HEAs and there’s nothing wrong with that. If you want to write for that market, or buy only those sorts of books, go for it.

Since I don’t consider myself a dedicated-to-the-classic-genre romance writer, I don’t feel bound by the restrictions some would place on it. I write what my heart tells me to write. Some of my books have HEAs. I won’t spoil whether or not WCS is one of them. But the word ‘bittersweet’ should say a lot to those only looking for a tried and true Happily Ever After.

MR: A week or so ago, you posted on your blog that you won’t publish any more novels after WCS. But I know you well enough to know that you won’t stop creating things in one form or another. So what’s next on the horizon for February Grace?

FG: Thank you, you are very kind. I am focusing right now on taking care of my health, and trying to get my mind and body back into some sort of functioning harmony.

I am also dabbling with flash fiction and poetry as I am inspired to do so and I will likely post some of those little things under a new project I’ve started at Wattpad called Wishful.

It’s meant to be ongoing, eclectic, and could include everything from artwork to six word stories or longer short stories and flash fiction. It’s my hope it’ll be a place where I can still share some things with readers yet keep my focus on my health where it has to be.

I am so grateful to my publisher, Booktrope, for the five novels we’ve published together in the past two years. I am grateful to the wonderful team of people who helped make those books a reality. I’m so grateful, to so many, for reasons that I can’t even begin to explain.

MR: Finally, the opening paragraph of WCS employs some really stunning language, and the minute I read it, I knew I’d want to read the entire book. Would you allow me to share that paragraph with my blog readers?

FG: Of course! I’d be honored if you did. In fact, I’d be happy to share most of the first page if you’d allow me. Thank you for the opportunity to share… here it is:

The wail and cry of the whistle. The puff of the engine. The clang of the bell and grinding screech of the brakes… all combined with the roar of a biting winter wind.
No matter how old I live to be, I will never forget that particular cacophony, an orchestra tuning up in preparation for a command performance. When I heard her approach, I knew the journey I was about to take would change me— no matter where I ended up when it was over.
She was beautiful, dark, and strong, with powerful legs beneath her as she rode the rails into the station. Plumes of white and grey rose around her as she moved, fluttering like angel’s wings. The smell of the smoke was a singular aroma. Coal, fire, and heat all combined to intoxicate a man, to loosen the ideas in his head from solid form into threads meant to be spun into the foolishness of dreams.
She was a vixen, a siren, a savior, and damnation all in one. All things that beckon men to follow her anywhere, do anything to finally reach ecstasy before demise.
She was one of a kind, this engine, and her name was Aurelia Belle.

You can find out more about February Grace by visiting her at: http://www.februarywriter.blogspot.com or chatting with her on Twitter @februarygrace

My three published novels, LEAVING THE BEACH (a 2016 IPPY Award winner), LIVING BY EAR, and IT DOESN'T HAVE TO BE THAT WAY focus on women figuring out who they are and what they want from life. Music and musicians have a way of finding their way into the stories. I live in the Boston area with my family and pets.
View all posts by Mary Rowen →
This entry was posted in books, interviews, Uncategorized, writing and tagged bittersweet, Booktrope, fantasy, february grace, HEA, interview, romance, wishing cross station, writing. Bookmark the permalink.