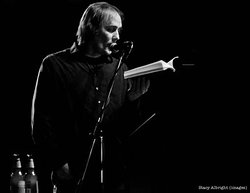 When I was in third grade, my mom bought one of those K-Tel compilation albums that were big in the 70’s. She put it on the record player one day after school, and we sat on the couch and listened to it all the way through. She even let me flip the record when side one ended. “Don’t scratch it, David.” It must have contained twelve or fifteen songs, but these days I only remember one, “Rock and Roll All Night” by KISS. It instantly became my favorite song, and though I didn’t fully comprehend what it meant to rock and roll all night and party every day, I did get the message. It seeped in through every pour in my skin, and I played that record, that one song, every day after school, and every time, my mother warned me, “Don’t scratch it, David.”

Records became precious things after that. I was careful. I didn’t lay them about on the floor or the coffee table. I’d put them back inside the covers and place them in the proper alphabetical spot on the shelf. I’d only get out one record at a time and ever so carefully hold it by the edges as I set it on the record player before dropping the needle on with a softness that spoke to my fear of the record as a fragile thing. But once the music started, things were different.

I’d get the vacuum cleaner and pretend it was a microphone, and I’d dance and sing pretending I was either Gene Simmons or Paul Stanley. Sometimes, I’d grab a baseball bat or my mom’s tennis racket and use it as a guitar. I’d jump on the couch and then leap as high as I could. I’d do somersaults and twist and even shout. I’d channel the music and just let it do to me what it would. I knew then, even before I ever held a real guitar, that music was what I wanted to do.

I played in bands for years, all the way into my forties, and I once dropped out of college and moved to Detroit for the sole purpose of joining a band, The Generals, and through that band I got the joy of finally playing “Rock and Roll All Night” live. I was 22 then. The band was popular in Detroit and did some touring through the the midwest. We all lived together and had band practice every night when not on the road. After practice, we’d hit the bars or go out to see other bands. We’d sleep in, and whoever got up first would take the beer bottles and cans back to the store to collect the ten cent deposit. Another band, Watershed, referred to The Generals in the liner notes of their CD like this: And thanks to The Generals, the band that drinks beer to sober up. And when I saw that, I knew it had become true. I was living the dream that I first heard about that day with my mom. Rock and Roll All Night and Party Every Day.

At 46, I’m not in a band anymore, but music is still a spiritual thing for me. It has seeped in a little deeper with age and settled into a corner of my heart. I don’t jump off couches these days or do somersaults. I don’t scream or shout. I simply grab the acoustic and sit on a chair and pluck out a few old tunes, sometimes those old Generals tunes. Sometimes, I’ll improvise and just play whatever chords and notes come to my fingers. Sometimes, I’ll hear a song and decide to learn it, need to learn, and that’s where I’ll leave you. I wrote about this in The Music Book, the moments of learning a new song and feeling it take shape, the feeling of creating music and pushing it out into the room, into the world. They’re magical moments, more so even than some of those night on stage when the fans were screaming for one more song. They’re personal moments, perfect moments, where nothing exists but me and the music.

Ólöf Arnalds. She’s a singer/songwriter from Iceland, and I’ve noted her in my notebook for two reasons. First, and most obvious, is that she’s coming to Seattle so I’ll go to the show and write about it, hopefully talk to her about music and other things, maybe buy her a drink. More important, though, is her song “Surrender” with Björk on background vocals and the fact that it is hauntingly beautiful, something akin to a ghost that whispers in your ear, breathy, warm, soft, telling you to relax and that the haunting isn’t really a haunting; it’s simply a connection to another world, another plane of existence. It’s terrifying, yes, but also exhilarating, even lovely. The song is played on a charango, which is a small acoustic Andean instrument with ten strings and a tight plucky sound, and in the moment I’m trying to transpose the music to guitar. It’s slow work stopping and starting the song and figuring out the notes. I get one phrase and work at it until I play it well and then move on to the next, back and forth and back and forth, and the song starts to take shape outside of my head. It’s in my hands now, a physical thing that I toss about the apartment. It bounces around in a delicate way, landing on the couch and rolling on the floor, but then I get a little more confidence with the music and dig into the fretboard to grab hold of the notes. I use a pick rather than my fingers and the sounds harden a little and jump about with more force. They shoot around the kitchen, crawl across the ceiling and hover above me until I stop playing. Then they splash down like a waterfall, and I kick my left foot out and knock over a few empty beer bottles and one nearly full one. I should clean it up, but spills can be cleaned any time. Musical moments like these don’t always come, and they never last too long, so I let the beer soak into the carpet. I play the song again and feel glad that I’m home alone on a Friday night, and this time when I get to the chorus, I sing about choosing now, about claiming my power.

Dave O’Leary is a writer and musician living in Seattle. His second novel, The Music Book, is a collection of the writings O’Leary has done about Seattle bands for both Northwest Music Scene and the now defunct Seattle Subsonic. It is a fictional narrative wrapped around and within the actual music, a story about live music in Seattle and, more broadly, about the power of music in our lives. A CD of the music experienced in the book has been released by Seattle indie label, Critical Sun Recordings. You can buy his books in many bookstores and here on Amazon.

My three published novels, LEAVING THE BEACH (a 2016 IPPY Award winner), LIVING BY EAR, and IT DOESN'T HAVE TO BE THAT WAY focus on women figuring out who they are and what they want from life. Music and musicians have a way of finding their way into the stories. I live in the Boston area with my family and pets.
View all posts by Mary Rowen →
This entry was posted in #musictuesday, guest blog, guest post, life experiences, music and tagged #musictuesday, album, bjork, dave oleary, detroit, gene simmons, Horse Bite, K-tel, Kiss, olof arnalds, paul stanley, record, rock and roll all night, surrender, the generals, The Music Book, watershed. Bookmark the permalink.