The Fine Line Between Fitness and Orthorexia 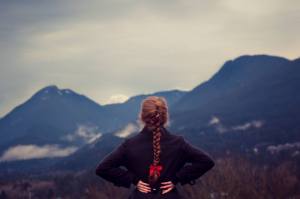 Orthorexia—have you heard of it? I hadn’t until a couple of weeks ago. Or maybe I should say that I’d never heard the word orthorexia. But then an issue of Fitness magazine showed up in my mailbox. I have no idea why, or where it came from—there was no mailing label on it. It was just there.

Now normally, I avoid magazines like Fitness, because back in the days when I was anorexic and bulimic, I subscribed to Runner’s World, and pored over articles about new diets and better workouts with almost religious fervor. These days, it’s my goal to eat well and exercise moderately without getting obsessive about anything. So I was about to toss the issue of Fitness into the recycle bin when one of the headlines on the cover caught my eye. It said, “When Being Healthy Turns Harmful.” I couldn’t resist taking a look.

It turned out to be a really great, informative article about orthorexia, and if you’d like to read the entire thing, it’s called “Are You Too Healthy for Your Own Good?” and is written by Elizabeth Zeman (Fitness, July/August 2014). So what is orthorexia? Well, it’s an eating disorder that affects people (mainly women) in their 20s, 30s and 40s. In a nutshell, orthorexics are people who believe they’re being ultra healthy, but are actually doing real harm to their bodies by exercising too much and/or dangerously limiting their diet. Unfortunately, it’s a difficult condition to diagnose because people—especially Americans—are constantly being told to exercise and eat well. But with orthorexia, moderation has been lost, and the person who seems to be the picture of health is actually spinning out of control.

According to the NEDA website (National Eating Disorders Association) the term orthorexia was coined by Dr. Steven Bratman, who became orthorexic and wrote a book about it called Health Food Junkies: Orthorexia Nervosa–the Health Food Eating Disorder. The term orthorexia literally means, “fixation on righteous eating.” Here’s a quote from Dr. Bratman. “I pursued wellness through healthy eating for years, but gradually I began to sense that something was going wrong.  The poetry of my life was disappearing.  My ability to carry on normal conversations was hindered by intrusive thoughts of food.  The need to obtain meals free of meat, fat, and artificial chemicals had put nearly all social forms of eating beyond my reach.  I was lonely and obsessed. … I found it terribly difficult to free myself.  I had been seduced by righteous eating.  The problem of my life’s meaning had been transferred inexorably to food, and I could not reclaim it.”  (Source:www.orthorexia.com)

Another insidious thing about orthorexia is that it sneaks up on people. Ask any anorexic when she first started depriving herself of food, and she can probably pinpoint the general time period in her life. And almost every bulimic can tell you the first time she vomited or used laxatives to purge. But with orthorexia, it happens gradually. A woman might start running a few miles a day to get healthy, and her friends and family will commend her. “So,” she’ll think, “if a few miles is good, then more will be even better.” The next thing she knows, she’s training for a marathon. But since she’s not feeling terrific or running as fast as she’d like, she begins eliminating certain foods from her diet, or adding large amounts of other foods, believing they will help her achieve her desired results. Again, her friends will often tell her she’s “so disciplined” and “a role model” when in fact, she’s losing the ability to eat intuitively, which includes stopping when she feels full. This can lead to serious health and social problems. People with orthorexia will often skip social engagements because their preferred foods won’t be available, or because attending the engagement will cause them to forego their exercise routine. And it’s easy to see how all of this can contribute to depression.

So how can you tell if you’re becoming orthorexic? According to NEDA, eating healthy is great, but you may have a problem if 1) food is taking up an inordinate amount of time and attention in your life; 2) deviating from your diet is met with guilt and self-loathing; and/or 3) your diet is used to avoid life issues and leaves you separate and alone. There’s a lot more helpful info about orthorexia on the NEDA page here.

Also, at the end of the article in Fitness, there’s a helpful guide that describes some of the differences between a healthy lifestyle and orthorexia. The following is taken directly from that article:

Healthy: You sleep through your alarm and don’t have time to do the tempo run on your half-marathon training schedule, so you do it when you get home from work.

Obsessive: You sleep through your alarm and don’t have time to do the tempo run on your half-marathon schedule, but you do it anyway, show up late for work and miss an important meeting.

Healthy: You eat a decadent dessert at a friend’s birthday dinner and think, “Well, at least I worked out today!”

Obsessive: You eat a decadent dessert at a friend’s birthday dinner and think, “That’s the last time I’m eating out with friends!”

Healthy: You’re so into your new high-protein, low-carb diet that you think about it all the way to the grocery store.

Obsessive: You’re so into your new high-protein, low-carb diet that you think about it during sex.

Healthy: You have no time to cook, so you scan a takeout menu, attempting to choose something that isn’t a total fat and calorie bomb.

Obsessive: You have no time to cook, so you scan a takeout menu, attempting to calculate the exact number of calories and fat grams in each option.

Healthy: You strain a quad in Spinning class, so you take a week off before getting back in the saddle.

Obsessive: You strain a quad in Spinning class, so you ice it, heat it, wrap it, pop some ibuprofen and get back in the saddle the next day.

The good news is, orthorexics can recover. NEDA says that although orthorexia isn’t usually diagnosed by doctors, professional help is often necessary. And choosing a practitioner skilled in eating disorders is the best choice.

And one last thing. Although I hope neither you nor anyone close to you is suffering from orthorexia, please do seek help if you suspect it in yourself. And if it’s a friend who may be suffering, be aware that she—similar to people with anorexia and bulimia—may be in denial of her problem or not want to get help for it. Therefore, confronting her directly is almost always the wrong approach. Instead, the article in Fitness suggests asking your friend to get a medical evaluation. Tell her you care about her and don’t want her to be sick, and offer to go to the evaluation with her.

My three published novels, LEAVING THE BEACH (a 2016 IPPY Award winner), LIVING BY EAR, and IT DOESN'T HAVE TO BE THAT WAY focus on women figuring out who they are and what they want from life. Music and musicians have a way of finding their way into the stories. I live in the Boston area with my family and pets.
View all posts by Mary Rowen →
This entry was posted in eating disorders, health, life experiences, Uncategorized and tagged Dr. Steven Bratman, eating disorders, eating obsession, Elizabeth Zeman, exercise obsession, Fitness magazine, orthorexia, unhealthy eating. Bookmark the permalink.

8 Responses to The Fine Line Between Fitness and Orthorexia