Why the Women’s Marches Were So Important 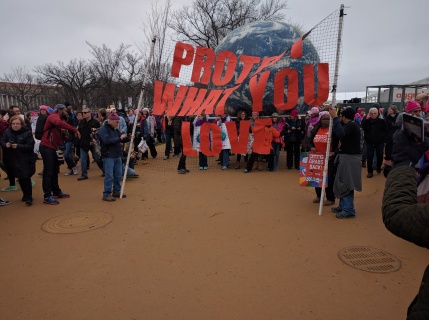 My daughter and I decided to go to the Women’s March in D.C. almost as soon as we learned of its existence. But just a day or two later, I found out that plans for the event weren’t going smoothly. The bottom line was that the white women organizing it had been unintentionally insensitive to some issues concerning race. And even when changes were made—and more diverse organizers were hired—the bad taste lingered in many mouths. In the days leading up to the March, the press seemed to be giving the conflict almost as much coverage as the actual event, and that disturbed me. I couldn’t help wondering if I was pulling my teenage daughter out of school and bringing her on a four-day journey, only to attend a poorly attended, primarily white event. 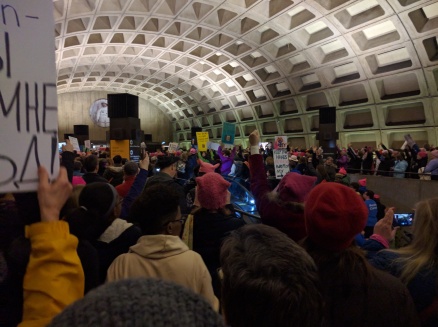 That fear was quickly quelled on the morning of January 21st. The Metro train from our hotel in Alexandria into D.C. was jammed with people of various genders, ages, and ethnicities, most wearing pink pussyhats and carrying some of the most creative protest signs imaginable. But when we reached the L’Enfant subway stop, a very different type of fear arose in me. There were so many people trying to exit the station, that police had to regulate flow of people, and that particular Metro stop was temporarily shut down. Had I brought my kid to something too big? Would we be safe? The riots of the previous day came to mind, and I tried to figure out what we’d do if violence erupted.

Fortunately, there was no violence at the D.C. March, nor at most of the sister marches around the country and world, and my daughter and I were safely back in our hotel by early evening. 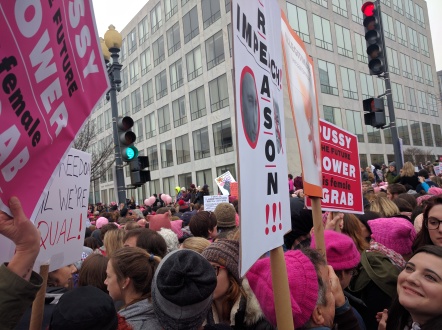 Was everything amazing? Well, that depends on how you define amazing, and also on your health and physical condition. As everyone knows by now, the marchers in D.C. numbered somewhere around half a million. I don’t think I’ve ever been in such a large, packed crowd. Meeting up with friends was complicated, and, in several cases, impossible. Also, moving through such a dense crowd was only possible around the edges. The sound system was fairly good, and organizers did a great job setting up Jumbotrons, but even so, we only saw about a quarter of the program, if that. We stood in one spot for four or five hours, and if we’d had to use the bathroom, getting there would’ve been a challenge. Also, because of the size of the crowd, marching was extremely difficult, as much of the designated “march” area was filled with people.

On the other hand, we contributed to history (or HERstory). As we watched the TV news in the hotel that night and saw the magnitude of the crowd, we were thankful that we’d had the opportunity to be part of such a thing.

Also, the current administration may not be doing much for feminists or liberal causes these days, but Mr. Trump has made it clear that he pays attention to crowd size, so seeing images of the crowds at the various marches around the world must’ve made some sort of impression on him.

Furthermore, it’s also almost impossible to attend such an event without wanting to stay involved in causes you care about, and obviously, there will be plenty of opportunities for involvement in the immediate future. I admit that my participation in politics has waxed and waned quite a bit during my lifetime, but since the Women’s March, I’ve been doing what I can to contact legislators, share factual information in the face-to-face world and on social media, and stay up to date on what our government’s doing. And based on conversations with many people, almost everyone’s doing the same thing. The Women’s Marches awakened the activists in many Americans—both those who attended and those who saw them in the media—and I doubt there’s been a time in the last thirty years when more people have been involved in the political process.

Finally, on a personal note, the experience of going to D.C. and staying there for a few days allowed us to spend time in close quarters with people whose political viewpoints differed from ours. If you live in a swing state or an area where lots of left-wing/right-wing conflict exists, this may seem silly, but we live in a very liberal town, where very few people support Trump. (And those who do don’t normally admit it publicly.) For that reason, not only was Trump’s victory extra shocking for my family and me, but almost everyone I’ve spoken with since election day has been upset. But staying at a hotel in the area—especially on Inauguration Day—made it clear to us that we weren’t in the Boston area anymore. Guests in the hotel were a mix of Trump supporters (wearing pins and red hats), people there for the March (the pussyhats were a dead giveaway), and others there for business or tourism. And both nights that we were there, we attended the hotel’s evening reception. At first, we were a little nervous about how people might act, but what we experienced gave us some hope. Everyone acted respectfully, despite the fact that most guests were literally wearing their political sentiments on their heads. We held doors for each other, exchanged pleasantries, and made small talk in the elevator.

And so, my hope in America was renewed last weekend. Yes, at the Women’s March, but also at the hotel, where people were just people, taking time out of their regular lives to celebrate and work for what they believe in. It’s easy to get caught up in the actions of the current administration. And make no mistake: I’m strongly opposed to Trump and Bannon, and believe that if they’re not curtailed, America as we know it will be in grave danger. But I also have faith in the people who live here and love their country. I believe we have the ability to come together and preserve what’s truly important to us: a democracy that works. It won’t be easy, but I think it’s possible.

My three published novels, LEAVING THE BEACH (a 2016 IPPY Award winner), LIVING BY EAR, and IT DOESN'T HAVE TO BE THAT WAY focus on women figuring out who they are and what they want from life. Music and musicians have a way of finding their way into the stories. I live in the Boston area with my family and pets.
View all posts by Mary Rowen →
This entry was posted in Uncategorized. Bookmark the permalink.

14 Responses to Why the Women’s Marches Were So Important