How Do You Know When You’ve “Made It” as a Writer? 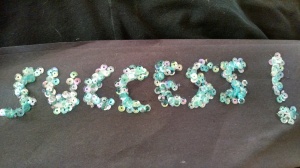 Has it happened to you? Have you “made it” as a writer? I have! But before you read on, please note the quotation marks around the words made it. Because…well, you’ll understand soon if you don’t already. Here’s my story.

The year was 2007, it was autumn, and I’d been querying my first novel manuscript for about a year. I should probably put quotation marks around the word novel too, because I’m not sure if that manuscript actually qualified as a novel. But back then, as far as I was concerned, it certainly did. Not only was it a novel, but quite possibly a bestseller. Although I was pretty sure it’d work even better on the big screen. And everyone knows selling film rights is the real definition of writing success. Right?

What genre was this manuscript? Good question! It started out like erotica, but then sort of became women’s fiction, then sort of became a mystery/thriller. And it had so many great elements. Sex! Romance! Betrayal! Sleazy characters! A gorgeous-but-suspicious house cleaner! Sexy guys who tour around as children’s entertainers, but are actually wild, partying rock musicians! (I sincerely wish I were joking about that last part, but I’m not.)

Several of the literary agents who took the time to formally reject the thing pointed out that the story had no discernible plot, and some noted that most of the characters were cardboard. At least one asked what the point of the whole thing was. And was there any lesson or message that the reader should take away? Well, no! It was literary fiction. And isn’t literary fiction supposed to keep you guessing?

You can see where this is going. I’d written over three hundred pages of utter crap. It was fun, though. While my kids had been in preschool, I’d sat on the couch hacking things out, day after day. Hmm, what should I write today? Oh! I know. I’ll write a chapter about a man and woman having dinner in a restaurant, but I’ll make it read like a lost episode of The Twilight Zone. Yeah. That’ll be cool. And it’ll be a nice contrast with the previous chapter, in which the man seemed totally normal, because in this chapter, he’ll be acting bizarre. Why so bizarre? Hmm. Maybe he’s on drugs, or maybe he’s just got a strange personality. Or maybe he’s a criminal! It would have to be up to the reader to figure things out, because the writer sure as hell didn’t have a clue.

Yes, this is embarrassing for me to admit, but that’s how I thought bestsellers got written. Years earlier, I’d fallen in love with movies like Blue Velvet, and had been left with the very arrogant impression that I could write something like that if I just took the time to do it. As if!

Anyway, one day in 2007 as I sat at my computer reading yet another rejection letter, my doorbell rang. It was a friend dropping something off, and when I told her of my difficulty finding a literary agent, she told me she had a personal connection with a very good and successful one. She and the agent weren’t exactly friends, but acquaintances, and maybe if I queried her, I’d get a better response.

I wrote to that agent immediately, and was surprised when she replied quickly, saying she’d like to see the first chapter. Excited, I sent it. A few days later, the agent wrote back, asking for another chapter or two. Then, she requested the full manuscript.

And that’s when I “made it.” In my head, of course. I’m not sure why I became so convinced that this was going to be it, but I did. The truth is that the beginning of the manuscript wasn’t so bad—especially since there was no real indication as to where it was headed—and other agents had also requested additional pages after reading the first couple of chapters. But this agent came with a personal connection, and, of course, I was tired of querying.

I should also mention that the holiday season was fast approaching, and I’m sure the agent was busy with holiday stuff. In any case, throughout November and December, I didn’t hear a peep from her. But instead of being rational and assuming she had other things on her mind besides my silly manuscript, I assumed she was crazy about it. She’s probably reading and rereading it, trying to figure out how to sell it at the highest price. Or maybe she’s talking to film producers already.

My holidays, therefore, were pretty good. I went to various parties and events feeling a true glow inside. By next holiday season, I’d think, I might be up for an Oscar! Or no, maybe not next year, but the year after, because it takes a while to make a good movie. When people asked what I’d been up to, I’d tell them I’d finished a manuscript and had my fingers crossed about something really big. And each time I’d say that, I’d believe a little more strongly that my story was going to explode—in a good way.

And here’s the hardest part for me to admit. I developed something of a haughty attitude. I’m normally a pretty humble person, but the prospect of becoming a superstar brought out some undesirable aspects of my personality. Sometimes, I’d just waste time fantasizing about the dresses I’d wear on the red carpet, but other times, I’d actually think of myself as a cut above my friends and fellow writers. After all, they were still working at normal jobs, raising families, or hacking away at short stories, screenplays, or novel manuscripts. But I was Hollywood bound.

Then, one Friday in January, I woke up feeling anxious and shaky. And later in the day, things got worse. Terrifying, disgusting, and shocking thoughts kept going through my mind and getting stuck there. I truly believed I was having a breakdown of some sort, and made an emergency call to my therapist. She agreed to see me first thing Monday morning, and helped me understand that I was suffering from a common anxiety symptom called obsessive thoughts. She also gave me some good strategies to stop those thoughts from controlling my life, and assured me they’d go away if I practiced the strategies.

But of course, she also asked if I was particularly stressed about anything. I told her about my “prospective book deal,” (imagine that!) and the movie deal I was also hoping for, and she asked if I was worried about what fame might mean for my family and me. And the more I thought about it, the more I realized that not only was I terrified of fame, but of what it was already doing to me. Who was I becoming? What had happened to regular old Mary? And what would happen if my fantasies became reality?

Well, as you might guess, I never found out. A few days later, the manuscript appeared on my doorstep, along with a lovely note from the agent, explaining why the story wasn’t working for her.

Of course, I cried. And questioned, and screamed a bit. But eventually I paid attention to what her note actually said, and realized I had a lot of work to do. I went back to the drawing board, starting a new manuscript, but also reading lots of books about plot and character development. I read novels and watched movies critically, paying attention not only to the stories, but how the writers conveyed those stories.

But as all that was happening and I began to write more purposefully, I also grew increasingly aware that my idea of “making it” as a novelist was pretty screwy. Yes, I’ve now got a wonderful agent and publisher, but what I really want is to become a better writer each day. Because writing isn’t about making money, or winning awards, or walking red carpets. Sure, those things happen sometimes, but some of the best writers I know have never achieved any of that, and don’t really aspire to it.

The other day, however, a writer I really respect shared a note she’d received from an anonymous reader. The note told the writer that her words had helped the reader—who’s suffering from serious medical issues—to keep breathing for another day. Now that’s my definition of “making it.”

My two published novels, LEAVING THE BEACH (a 2016 IPPY Award winner) and LIVING BY EAR, focus on music and following your passions. A new novel called IT DOESN'T HAVE TO BE THAT WAY is due out in September, 2020. I live in the Boston area with my family and pets.
View all posts by Mary Rowen →
This entry was posted in literature, movie deals, novel writing, publishing, writing and tagged agents, big screen, deals, Hollywood, literary agents, movie deals, novel, novels, publishing, writing, writing for Hollywood. Bookmark the permalink.

21 Responses to How Do You Know When You’ve “Made It” as a Writer?