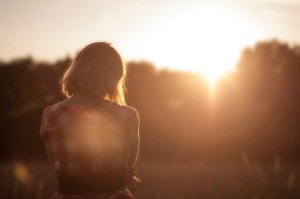 The other day, while walking my dog on a wooded trail, I noticed a young woman sitting on a rock, half hidden by trees, eating with a plastic fork. She didn’t look up as I passed; in fact, she turned her head away. Next to her was a backpack, which was clearly not empty.

I didn’t recognize the woman, despite the fact that I walk in that area quite frequently. She was attractive and dressed in casual, fashionable clothing. Most people, seeing her, would probably assume she was a student or office worker, just trying to find a little peace in this crazy, busy world.

And perhaps that was the case. But as I continued on my walk, my mind was flooded with memories of times when I ate like that–privately, carrying food to secret places–so no one would know I was binging on stuff I’d later purge. I recalled the many times I told friends at work that I had errands to do on my lunch break, when my only real errand involved going to the grocery store. Then I’d take the junk food I’d bought to a quiet place where I’d eat it, and hurry back to the office so I could vomit as inconspicuously as possible in the bathroom.

Even now–even after bulimia has been in my past for almost twenty years and I’ve written a novel, called Leaving the Beach, about a bulimic woman–I find it embarrassing to talk about that stuff. I wish so badly that none of it were true, and that I’d been a normal eater all my life. But seeing that woman in the woods reminded me of how sneaky and secretive bulimics are about their disease. And how skilled most of them are at hiding it, even from their closest friends and family members.

I know this because I kept my bulimia a secret for fifteen years. During that time, I had wonderful parents, caring siblings, great friends, and various boyfriends. But none of them knew I was bulimic until I told someone–my future husband–and got help.

Why? Well, that’s the point of this post. Because secrecy is an integral part of bulimia, just as itchy red welts are an integral part of measles. Therefore, if someone close to you is suffering from bulimia, there’s little chance they’ll tell you about it unless they’re so sick that they don’t know what else to do. But if you know what you’re looking for, you may be able to detect some warning signs and get them help before things get out of hand and/or the person does serious harm to their body. So here are some of those warning signs, courtesy of NEDA’s website. NEDA (National Eating Disorders Association) is an amazing, non-profit organization.

But I’ll leave you on a good note, because I’m hoping all the recent talk in the media about EDs is making a difference. The other day, someone directed me to this article in Glamour in which Zosia Mamet, of the HBO program GIRLS, came out and admitted that she’s currently dealing with an eating disorder. And while my heart goes out to her, I’m also blown away by her courage to talk about her illness while she’s still in recovery.

I hope Ms. Mamet will continue to get better, and also hope her bravery will inspire other people to talk to people they trust about their eating disorders. Because help is out there. It’s readily available and there are numerous ways to get it, even if you don’t think you can afford it. NEDA can help with that, and a lot of other things too. Communication is the key. Let’s really get eating disorders out of the woods and into the open.

My two published novels, LEAVING THE BEACH (a 2016 IPPY Award winner) and LIVING BY EAR, focus on music and following your passions. A new novel called IT DOESN'T HAVE TO BE THAT WAY is due out in September, 2020. I live in the Boston area with my family and pets.
View all posts by Mary Rowen →
This entry was posted in eating disorders, health, Uncategorized and tagged bulimia, eating disorders, GIRLS, NEDA, zosia mamet. Bookmark the permalink.