Our Bodies vs. Our Selves 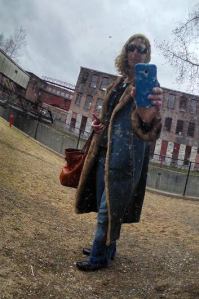 Anyone living in contemporary society realizes that our bodies are much more than just vessels that we use to transport our hearts, souls, and minds around the planet. Blame evolution and “survival of the fittest” for the way we humans gussy ourselves up when we’re looking for love, friendship, respect and/or sex. Not to mention the number of selfies people post on social media, despite the fact that many of those selfies show the person in a particularly good light, or in a way that person would like to be seen.

And—at least for many of us—it can be quite enjoyable to do things that make us feel more attractive. The beauty and fashion industries would crash and burn if people didn’t derive real—if fleeting—satisfaction from getting a new hairstyle, finding a new makeup or face cream, or buying that amazing new outfit or pair of shoes that makes us feel particularly great.

There’s also a good deal of evidence supporting the belief that people who like the way they look are often happier and more successful. Which makes sense: if we feel confident, that will show in our actions, and people are naturally drawn to confident people. Chalk another one up to evolution.

My point is that no matter how spiritual we are and how hard we focus on internal beauty, which—make no mistake—is the beauty that really counts, it’s hard not to want to look good too, or at least OK. I often wish that weren’t the case—as a mother of two middle-schoolers, I’m sometimes infuriated by this element of human nature. But I’m also old enough to feel pretty certain that we humans have a long way to go before we can ignore it.

The trouble happens when we go to extremes, particularly when weight is involved. It’s usually OK for a person to say they want to drop a pound or two because, hey, summer’s coming, and they want to look a little slimmer at the beach. America, as a country, has issues with obesity too, and many doctors advise their patients to lose some weight for the sake of their health.

But for some people, losing weight isn’t about health or a little slimming down. Or maybe it starts out that way, then escalates into an eating disorder. The reasons this happens with certain people and not with others are complex and still not very well understood, even by professionals. Heredity plays a large role in many cases, but there’s usually an environmental or emotional stimulus as well.

I’ve talked quite a bit about my history with eating disorders in other blog posts like this one. In a nutshell, I came to believe, as a teenager, that I’d be happier and more “popular” if I could lose a little weight. So I started dieting and then purging. Little did I know that my behavior would result in years and years of confusion, isolation, poor health, bad teeth, and despair. Thankfully, a boyfriend—who eventually became my husband—convinced me to seek the professional help which changed and saved my life.

In my new novel, Leaving the Beach, the main character, Erin Reardon, decides to try vomiting after arriving at the drunken conclusion that she needs to be thinner in order to attract the attention of David Bowie. As you might imagine, that choice doesn’t get her what she wants. But it does lead to a whole lot more bad choices.

At some point while I was writing Leaving the Beach, I began to wonder if readers would be able to relate to Erin. Was she too strange? Did she live in her own head too much? And at least one person who started reading the manuscript told me they weren’t able to finish it because of those factors. They also said they simply couldn’t believe a woman could be so self-destructive for so long and still manage to function in society. But many other readers have told me that they see a lot of themselves in Erin. Maybe they also had eating disorders, or maybe it was some other mental illness or obsession that kept them from being able to experience life in a “normal” way.

I’d love to hear about other peoples’ experiences with anorexia, bulimia, or other mental/health conditions that stunted your emotional development for a while. Even more importantly, I’d love to hear how you were able to overcome those issues and get your life back on track. Of course, I understand that many people don’t feel comfortable talking openly about such things and may wish to comment anonymously or not at all. But for people still suffering—and there are many in our midst—it can be quite helpful to learn about the struggles others have endured. Back when I was bulimic, I would’ve liked to hear stories like that. Perhaps I would’ve sought help sooner if I hadn’t felt so alone.

Oh, and if you’d like to read more eating disorder success stories, please check out this link on the website of NEDA, the National Eating Disorder Association. NEDA is a wonderful place to get help if you feel your eating (or lack thereof) is out of control.

An updated version of my novel, Leaving the Beach, is now available on Amazon.com and many other places where books are sold.

My three published novels, LEAVING THE BEACH (a 2016 IPPY Award winner), LIVING BY EAR, and IT DOESN'T HAVE TO BE THAT WAY focus on women figuring out who they are and what they want from life. Music and musicians have a way of finding their way into the stories. I live in the Boston area with my family and pets.
View all posts by Mary Rowen →
This entry was posted in eating disorders, health, writing and tagged anorexia, body image, bulimia, eating disorders, NEDA. Bookmark the permalink.

14 Responses to Our Bodies vs. Our Selves